Welcome to the biggest Volksfest in the world where people far and wide get their ‘German’ on to celebrate the tradition of Oktoberfest! Which…let's be honest... You shouldn't do without some traditional looking Oktoberfest costumes! Or beer… or pretzels… or Sauerkraut… or  a handful of Weisswurst… but we’ll just stick to the fancy dress side of things!

Despite the title including the word 'October' The Oktoberfest festival actually starts at the end of every September and the golden ale flows through to the beginning of October! The celebration of the German Oktoberfest started in Munich, Bavaria, all thanks to King Ludwig who held the first festival in 1810! Now that’s a long-running festival! Essentially this means it's almost time!! Don't leave your Oktoberfest costumes to the last minute, make sure you get your slap dancer and beer girl fancy dress outfits in time for a full dressed rehearsal of all your German dancing performances!

Once you’ve mastered the art of the German beer drinkers toast by singing ‘Ein prosit, ein prosit, der Gemütlichkeit!’ you must swiftly get your hands on Oktoberfest costumes too and totally immerse yourself in the culture that is this beer drinking festival.

Let’s get to the nitty gritty. Oktoberfest costumes are very specific. They consist of beer girl costumes for women (traditionally called ‘dirndls’) and lederhosen costumes for men.

Although Bavarians are proud of their blue and white diamond print tradition, beer girl or beer wench sexy costumes come in a huge variety of colour combinations, but all have the same tell-tale features which make them German styled Oktoberfest costumes. These German dresses for frauleins have flouncy skirt sections, cute puff sleeves and gathered puffy, blousy bust sections, plus corset style ribbon tie ups through the bodice for a flattering shape. Many of these Oktoberfest costumes are adorned with authentic looking, pattern embroidered ribbon trim to make the overall style look as close as possible to the traditional German dirndl. In turn, making you look like a traditional German Mädchen!

We won't deny that women’s beer girl Oktoberfest costumes can be quite revealing and down-right sexy, so cute petticoats, hot pants or German bloomers (kind of like puffed up knicker-bockers!) may be great additions for a little extra modesty! Also, dressing up in sexy Oktoberfest costumes and carrying the most giant beer steins to patrons at your party will give you ultimate German cred, so ladies….. it may be time to pump iron and work on those arm muscles! 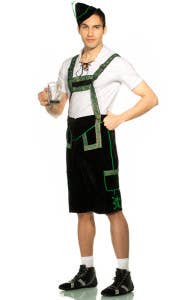 Now it’s time to discuss the slap dancing men! The Oktoberfest costumes you’ll need in order to pull off these slap happy moves are lederhosen costumes. Performing the Schuhplattler to your favourite Oompah music just won't be the same without them! That’s right, we're talking about the shorts with the braces, the knee high socks and the hat! Slap along to the local brass band wearing men’s Oktoberfest costumes and give your Fraulein something to cheer at! Lederhosen German costumes tend to be more toned down in colour, (and in our opinion, not nearly as sexy ;-)) settling usually for greens, browns or blacks. They are also often decorated with similar pattern embroidered trim for an authentic Bavarian look so you can use them, along with your practiced German accent, to blend in during your Oktoberfest celebrations.

If sexy beer girls and lederhosen aren’t quite what you had in mind, and you’d like alternative ideas for Oktoberfest costumes, try a beer bottle or a stein with some froth on top! Dress up as the reason behind the existence of Oktoberfest festivities in your very own Beer outfit. There’s also superhero Beerman and Beerlady Oktoberfest costumes who should have the delivery and upkeep of flowing beverages all sorted at your next party, to ensure all Bavarians-for-the-day have an almighty Guten Tag!

No Oktoberfest celebration is complete with some amateur slap dancing. Guys…. We suggest paying close attention to the below video, put in a few minutes of practice and make sure you earn yourself that next kransky!

Now head into the kitchen and whip up some traditional German food….. you’ll already have the beer to wash it down! 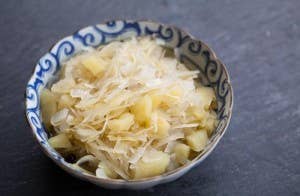 All text and images on this website are the property of Heaven Costumes Pty Ltd. Copying of our text or images without our express permission is illegal.